yesterday i posted the video for ‘mere anarchy’, the 2nd song to be released from my next/upcoming album:

Everything Was Beautiful And Nothing Hurt, out March 2nd.
the video involves my friend Julie and I, visiting a post-apocalyptic Earth after all the people are gone.
someone described us as ‘time traveling aliens’, which i guess is pretty accurate.. 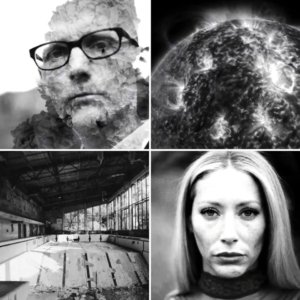 the title, ‘mere anarchy’, is a quote from one of my favorite apocalyptic poems, The Second Coming, by WB Yeats.
fun fact, readership of ‘the second coming’ rose 50% after the election of Trump…
p.s as you read the poem you’ll see i’m clearly not the first person to use it as a source for titles..
here’s the poem:

Turning and turning in the widening gyre
The falcon cannot hear the falconer;
Things fall apart; the centre cannot hold;
Mere anarchy is loosed upon the world,
The blood-dimmed tide is loosed, and everywhere
The ceremony of innocence is drowned;
The best lack all conviction, while the worst
Are full of passionate intensity.

Surely some revelation is at hand;
Surely the Second Coming is at hand.
The Second Coming! Hardly are those words out
When a vast image out of Spiritus Mundi
Troubles my sight: a waste of desert sand;
A shape with lion body and the head of a man,
A gaze blank and pitiless as the sun,
Is moving its slow thighs, while all about it
Wind shadows of the indignant desert birds.

The darkness drops again but now I know
That twenty centuries of stony sleep
Were vexed to nightmare by a rocking cradle,
And what rough beast, its hour come round at last,
Slouches towards Bethlehem to be born?

you can hear music that influenced the album in the everything was beautiful and nothing hurt playlist on spotify and youtube.  it will also be the first place to feature new music from the album.

the stems for the song are available to download via splice along with ‘like a motherless child’.

Tagged: Everything Was Beautiful and Nothing Hurt, like a motherless child, mere anarchy, Moby
Category: News