due to overwhelming demand moby has announce two additional shows at the echo. tickets for all dates below.

moby has announced that he will play shows at los angeles’ The Echo and New York’s Rough Trade in March to celebrate the release of his album everything was beautiful and nothing hurt.   tickets will go on sale friday at 10am local time but subscribers to moby’s mailing list will get access to tomorrow’s pre-sale tickets. you can sign up for access at the bottom of this page. 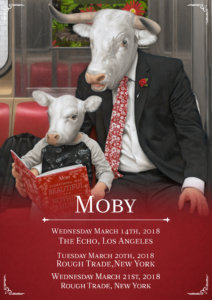 this week moby announced his forthcoming album, everything was beautiful and nothing hurt, would be released march 2nd. he shared the first single and video like a motherless child.

moby had also shared a playlist of music that inspired the album on spotify and youtube which will be updated weekly and is the first place you’ll find new music from the album. you can follow the playlist here.

Tagged: Everything Was Beautiful and Nothing Hurt, like a motherless child, Live, Los Angeles, Moby, New York, rough trade, the echo
Category: News